Synopsis: The story begins with a 10 year old Jiro Horikoshi. He longs for the sky and aims to be a pilot. When he becomes an adult and begins working on aircraft times of war have come. The thing which he should design was a fighter for a warship...

Miyazaki mixes the Kaza Tachinu of Tatsuo Hori and Jiro Horikoshi's life. In brief, Miyazaki's Kaze-Tachinu is not based on the true life of Horikoshi. Miyazaki mentioned it in an interview like this, "I think it is not a fantasy. There are some elements of fantasy, but it's not fantasy."

Toho started screening the first teaser trailers for Kaze-tachinu and Kaguya-hime on Saturday in theaters. They are 15 seconds each. Kaguya-hime begins from a scene of a thatched house of the country, and the beautiful Kaguya-hime appears at the end. In the Kaze-tachinu teaser a young Jiro Horikoshi who is handling an aircraft and Naoko who is painting a picture appear. Studio Ghibli will probably release a TV version of the trailer in February

Hiroshi Ichimura revealed several details during an interview with Kunihiro Suzuki (the president of Fine Mold) in the January issue of Scale Aviation magazine. Ichimura is the representative of Art Box which edits the Model Graphix, Scale Aviation, Armour Modeling, and several other magazines in this vein.

During World War II, Miyazaki's father managed a munitions factory to help a sickly uncle. According to Ichimura the factory produced windshields and vertical tails for the Zero fighter. It's not known whether this is the reason but Miyazaki seriously intended to purchase a Zero fighter from US. But his wish was not fulfilled due to Japanese law and the objection of his family. Then he tried to make a movie of the Zero fighter, but his ambition gradually faded. Then he drew the manga "Kaze Tachinu" in Model Graphix. "Kaze Tachinu" was a story of the Zero fighter at first, but it became a story of the KA-14 after many complications. Ichimura had talked with Miyazaki about the Zero fighter many times through his work. He revealed on NTV that he heard from Miyazaki, "I'll animate this( Kaze Tachinu)" and "considerable romantic elements will be included in it."

Q: What is the meaning of "Iza Ikimeyamo" (We must try to live)?

It is difficult to understand even by Japanese because it is not modern Japanese.

S: Paul Valery's poetry is quoted in French in the beginning of "Kaze Tachinu", and Tatsuo Hori translated it. It's "Kaze tachinu, iza ikimeyamo." Various people pointed out to say that this seems to be a mistranslation for some reason. It seems to be a meaning "wind begins to blow. We must try to live" by the literal translation. But Tasuo Hori translated it "kaze tachinu" (wind rised) in past tense. "Iza ikimeyamo" is ironic, it means "Let's live. No, let's die." A debate seems to continue all the time in Japanese literature history about why he did such a mistranslation. We were troubled, but thought that it is equivalent to respect to Tatsuo Hori to just use it.

Q: How does Miyazaki-san say about drawing an actual person?
S: Miyazaki has drawn the fact that happened on Jiro Horikoshi since the manga. But it is Miyazaki's creation about his personality. I visited Jiro Horikoshi's son to get permission and I got the consent with the word "Of course I do not mind such a thing." Miyazaki's Jiro Horikoshi has a calm character, so we do not understand what he thinks about at a glance. I thought he is possibly father of Miyazaki, then I pointed it out. He replied "I'd like to know my father in this film."

Q: The aircraft in the teaser looked like something that does not exist. How many imaginary aircraft appear in the film?
S: A considerable number of existing aircraft appear in the film. People back then were going to make aircraft with designs not thought about now but those were not able to fly well. Because Miyazaki knows them well, he draws them for the film. It differs from what is called creation. What Miyazaki draws certainly exists, if one follows the origin. 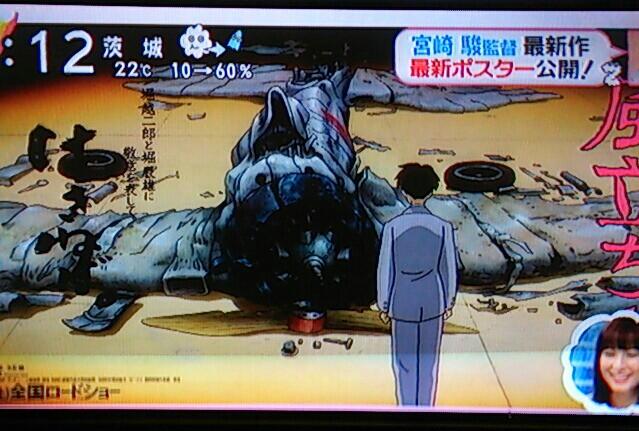 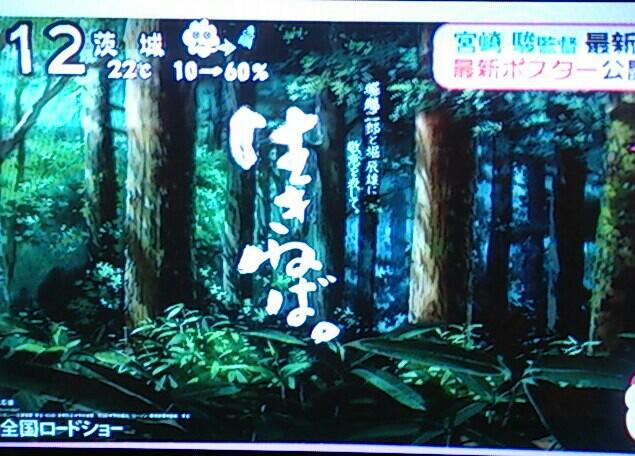 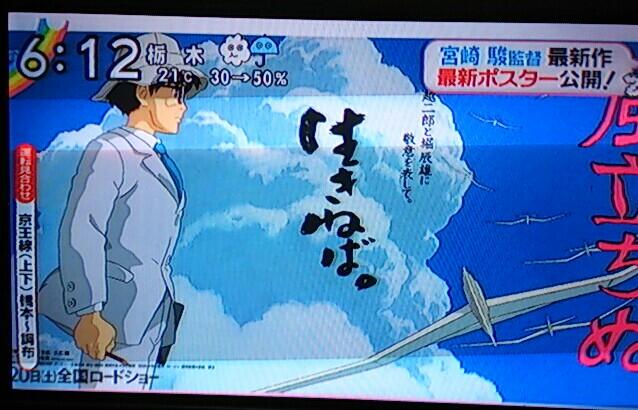